These Vegan Potato Pancakes are made with leeks, onion’s milder cousin. They are fluffy on the inside, browned on the outside – and can be made completely oil-free by cooking them in an air fryer. In the photo below, can you tell which one was air fried?

No air fryer? No worries, they can also be cooked on a pre-heated cast iron griddle/skillet, or ceramic non-stick pan. They can even be made in a stainless steel skillet, but probably would require more oil for frying.

This recipe can be made with leftover steamed or boiled potatoes. What a great way to use leftovers! Speaking of leftovers – the uncooked batter and cooked patties both store well in the refrigerator for a day or two.

The cooked potatoes and leeks can be pulsed in a food processor (you do not want to create a smooth paste, so only pulse a few times), or you can chop them up by hand. 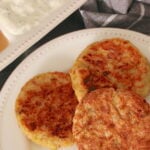 Fluffy on the inside, browned on the outside – and full of that yum factor!
Course: breakfast, main course, side dish
Cuisine: American
Servings: 8 pancakes
Calories: 81kcal
Author: Judy DeLorenzo

Flaxseeds can be ground using a bullet blender (or other blender), or spice mill. Since the oil in flax turns rancid easily, store flaxseeds in the refrigerator, and leftover ground flaxseed in the freezer.

Trim off the roots, cut off the tough upper portion of the stalks, and peel off the dark-green outer leaves (save for vegetable broth if desired). Slice the remaining tender white and light-green stalks into 1/2-inch-thick slices. Drop the slices into a bowl of water; massage the leeks to release any dirt hiding between the leek layers. Let the dirt settle to the bottom of the bowl and then lift the leek slices from the water.

What can you serve potato pancakes with?

They go well with so many sauces and dressings such as applesauce, Vegan Tzatziki Sauce, Roasted Golden Beet Hummus, and Creamy Dill Sauce and Dressing. They also go great with the Buffalo Sauce, Romesco Sauce, Spicy Sriracha Tahini, Spicy Peanut Dressing, and Cucumber Dressing recipes – all in my cookbook.