I love trying new dishes. When I recently tried pasta poblano, it was love at first bite. I couldn’t help thinking, “how did I not know about this dish all these years!” My version is gluten-free vegan. In addition to being delicious, this meal is quick and easy to throw together even on a busy week night.

I love serving this creamy poblano sauce over spaghetti or other pasta. It also makes a fantastic sauce for quesadillas, burritos, fajitas, and the like. Toss with cooked rice to make an easy version of arroz verde, AKA green rice. It can also be mixed with quinoa.

Roasting poblanos chars the skins which makes them easy to peel. In addition, the peppers will become more flavorful and taste a bit smoky after charring. There are three methods for roasting peppers.

How to roast peppers under the broiler

Put the peppers on a broiler pan and broil about 3-inches from the flame. Turn often using a pair of metal tongs; try to char the entire pepper. This method is a bit of a pain because you have to keep pulling out the broiler pan to turn the peppers, but it does the job.

How to roast peppers using a gas stove

Place peppers on your stove’s burner grate and cook directly over the flame. Turn the peppers often using a pair of metal tongs; try to char the entire pepper. 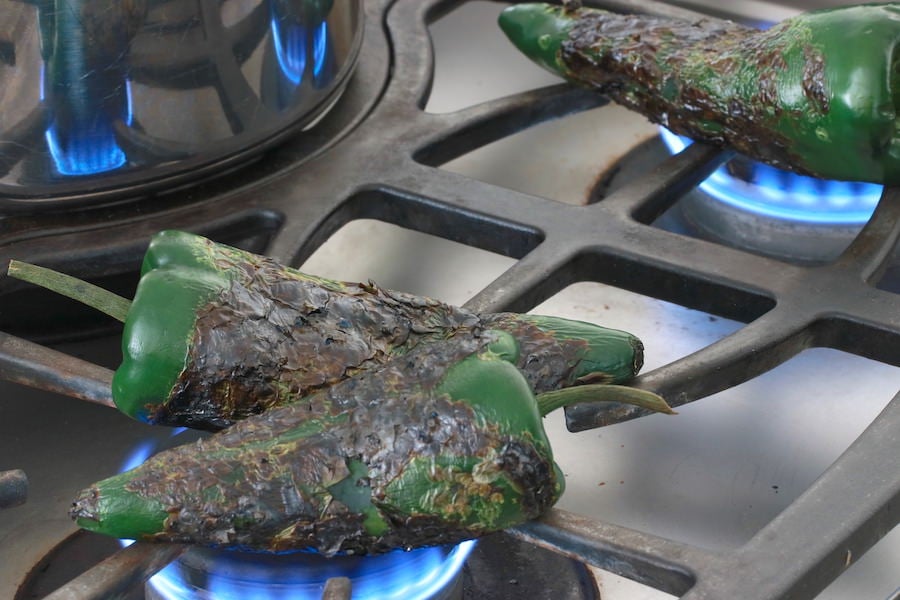 How to roast peppers using a gas grill

Place the peppers on your grill’s grate and cook directly over the flame. Turn often using a pair of metal tongs; try to char the entire pepper.

How to Steam Roasted Peppers

After the peppers are roasted, steam them for 5 to 10 minutes to make them easier to peel.

Some people put roasted peppers in a paper bag to steam. I’m not a fan of the “brown paper bag method.” In addition to it not seeming sanitary, the USDA warns “ink, glue, and recycled materials in brown paper bags may emit toxic fumes when the bag is heated”.

I prefer using the “plate method” showcased in the short video clip below. You basically sandwich the peppers between two plates. If you’re roasting a lot of peppers, put them in a covered casserole dish to steam.

How To Peel Charred Peppers

Rub and peel the charred skins off with a paper towel or your fingers. Some people peel the peppers under running water. I don’t because I find that doing so washes away some of the smokey flavor. 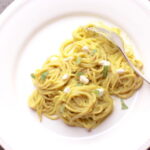 My version of Pasta Poblano is gluten-free vegan. In addition to being delicious, it's quick and easy to throw together even on a busy week night.
Course: main course
Cuisine: American, Mexican
Keyword: Mexican pasta
Servings: 6 servings
Calories: 328kcal
Author: Judy DeLorenzo

As I previously mentioned, this poblano sauce is also wonderful mixed into rice as well as quinoa.

If you enjoyed this Pasta Poblano recipe, you may also like Vegan Garlic Scape Pesto and Chickpea Pasta with Sautéed Veggies.