The idea for Veggie Au Gratin came to me out of the blue, not influenced by anything I’ve ever eaten or read about online. Roasted vegetables, with a lentil “gravy,” and an aquafaba batter topping that’s baked until golden and crusty. Yum!

I thought it fitting to call this recipe Veggie Au Gratin since per wikipedia, “gratin is a widespread culinary technique in which an ingredient is topped with a browned crust.” If you try it, please leave a comment below.

How To Use Aquafaba

Don’t know how to use aquafaba, the brine from a can of beans? Don’t worry. I created a video explaining how to transform this juice into an airy batter and crust. It’s a pretty magical ingredient. This batter is the same one used for the chiles rellenos recipe in my cookbook.

Why Do Legumes Make Some People Gassy?

If you don’t usually eat legumes (beans or lentils) then you may want to slowly introduce them into your diet before enjoying this recipe. Legumes contain complex starches called oligosaccharides that are hard for some people to digest – resulting in flatulence. The brine that beans are cooked in (aquafaba) contains a lot of these oligosaccharides. The good news? These fermenting oligosaccharides are considered to be important prebiotics because they feed beneficial microflora during this process.

Again, slowly introduce legumes into your diet and then you shouldn’t have any problems enjoying this recipe. Legumes are nutrient-dense; they contain a high amount of protein, fiber, and folate and are a good source of iron, magnesium, phosphous, manganese, potassium, and other nutrients. They have their place in a balanced plant-based diet, being nutritious, delicious, and versatile. 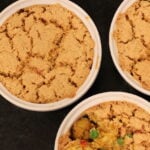 For the Lentil Gravy

To Prepare the Lentil Gravy

To Assemble the Casserole

To Prepare the Topping and Bake

If you roast everything on one sheet, the veggies will be too crowded and they’ll steam instead of roast. Do you only have one baking sheet? No problem, simply roast half of the vegetables at a time.