Who said gravy can’t be healthy? Try this nourishing plant-based mushroom gravy served over potatoes, veggie burgers, rice, quinoa, and more. It’s also delicious served over cauliflower rice. One of my readers loves this recipe so much – she eats it as mushroom soup! Make with a medley of mushroom varieties to ramp up the nutritional value.

Why are mushrooms good for you?

“It is now known that many of the mushrooms presently under cultivation rank above all vegetable and legumes (except soybeans) in protein content, and have significant levels of B and C vitamins and are low in fat. Research has shown that certain cultivated mushrooms reduce serum cholesterol, inhibit tumors, stimulate interferon production and possess antiviral properties.

“the mushroom cultivator: a practical buide to growing mushrooms at home” by paul stamets and J.S. Chilton 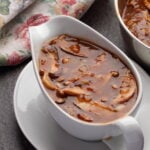 Sage and Rosemary Blend: Thoroughly blend equal amounts of dried sage and dried rosemary using a spice grinder or bullet blender (some have a milling blade).

The following optional variations involve cooking Salisbury steaks or chicken cutlets in the Mushroom Gravy. Depending on how many people are being served, you may need to double the gravy recipe.