This Vegan Thai Noodles recipe is my take on traditional pad Thai. What makes it different? It’s soy-free and packed with an array of colorful veggies that are either spiralized, grated, or thinly sliced. Vegetables prepared in this way cook fast and toss easily with pad Thai noodles and sauce – plus the presentation looks beautiful 🙂

How do you cook Thai rice noodles?

For this recipe the noodles aren’t cooked in a pot of boiling water like you would normally do. Instead they are soaked in water for 20 to 30 minutes, then briefly stir fried.

How do you make pad Thai sauce without soy or fish?

Most pad Thai sauces contain soy and fish; this recipe contains neither. Instead it’s made with raw honey, coconut aminos, rice vinegar, Thai curry paste, and veggie broth. To ramp up the umami flavor, I suggest soaking a bit of kombu sea vegetable and dried mushrooms in hot water. The resulting dark broth is then added to the sauce. This is an optional but easy and useful step.

Spiralizers easily transform vegetables into healthy and delicious “noodles” that pair wonderfully with this dish. Long strands of impressive noodles flow out in just seconds. Cut extra-long noodles with kitchen shears or a knife to make them easier to eat.

No spiralizer? No worries. Simply grate the zucchini, carrot, and daikon using a box grater; thinly slice the pepper and onion.

I’ve been spiralizing zucchini, carrots, and daikon radish for years, but this is the first time I tried spiralizing peppers. They came out great – and it was fast and easy! As you can see I spiralized the pepper whole. When I got to the seedy part – I removed the pepper from the unit, rinsed away the seeds under running water, then finished spiralizing.

This was also my first time spiralizing onion. I spiralized it whole, and believe me when I say it was incredibly effortless and quick – and oddly fun!

Look at all of these gorgeous veggie noodles (and soaking rice noodles) ready to be stir fried in a bit of oil. Or, if you prefer, skip the oil and stir fry in veggie broth. I wrote another post recently entitled Cooking without Oil which you may find helpful. 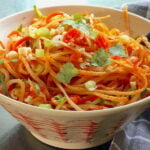 How to Chiffonade Basil

Chiffonade is an easy technique for cutting basil (and other herbs) into ribbons. These ribbons make a  lovely and tasty garnish.

Add 3 to 5 cooked shrimp to the omnivore’s bowl before serving.

If you enjoy this recipe, you should also try my Vegetarian Thai Green Curry Recipe and Healthy Ramen Noodle Bowl.

How to Freeze Green Beans without Blanching